New Book Press Release – Between Heaven and Earth: A Journey With My Grandfather 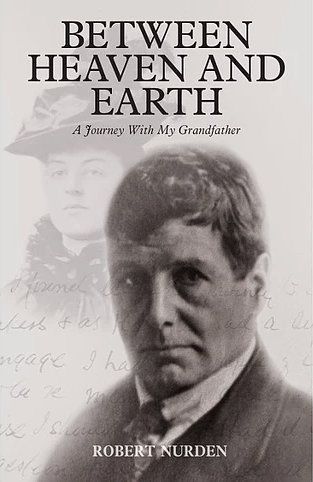 Stanley James (the author’s grandfather) was by turns a cowboy, a shepherd, a navvy, a hobo, a reporter, a soldier (in the Spanish-American War), a poet, a playwright and an actor. An extraordinarily varied career by any standards but this man was also a socialist, a pacifist, a nonconformist minister and a devout convert to Roman Catholicism. Yet diaries and documents from the time revealed another side to this man of faith – and, in particular, the pain he caused the women in his life through his adulterous affair and liaisons ….

As a young Englishman in the Canadian West during the late 19th Century, Stanley James lived a life full of adventure and excitement. On his return to England, he married and apparently settled down. A man of religious conviction, he became a nonconformist (Congregational) minister. He both charmed and alienated his Walthamstow congregation with his socialism, pacifism and feminism. Then, in 1923, Stanley James converted to Roman Catholicism and reinvented himself as one of the best-known Catholic writers of the English-speaking world. In 1941 he was appointed Deputy Editor of the Catholic Herald and, by the time of his death, he had authored nine books about his politics and his beliefs.

Widely respected for his knowledge, passions and insight, Stanley James worked alongside Bertrand Russell and counted G.K. Chesterton among his friends – and, indeed, Stanley James’ reputation as an intellectual man of faith and integrity may well have remained untarnished to this very day were it not for the chance discovery of hundreds of secret letters and the diaries of three women ….

For Robert Nurden, the startling discovery of these papers shattered the image he had cherished of his grandfather as a devout and moral intellectual. The documents (quoted liberally in the book) show in intriguing and explicit detail that, as a husband and father of seven, Stanley James had had an affair and other illicit liaisons with members of his congregation. Just how much did friends and family know at the time? And how does Robert himself now view his illustrious grandfather as a result of these revelations?

Author, Robert Nurden is a writer and journalist who has worked on the Guardian, Independent on Sunday and Daily Telegraph, as well as other national publications. He has reported on a wide range of issues, as well as working as a travel writer. Now retired, he has spent the last three years travelling (in the UK and overseas) researching and writing the life of his extraordinary grandfather. He lives in East London, not far from where his grandfather was a minister. Robert Nurden was born seven months before his grandfather died. Robert was determined to find out what drove his grandfather – a complex and contradictory man, trapped Between Heaven and Earth.