I was listening to the weather forecast on BBC Radio 4’s Today programme one morning when the expression ‘rattle the windows’ stopped me short. Seconds later I heard ‘wet and windy fare’. And, before the broadcast was over, the announcer had come up with: ‘How do I break this to you gently?’
The three minutes to eight slot now sees me nervously awaiting yet more ridiculous expressions masquerading as accessible language. In the all-singing, all-dancing BBC lurch towards universal accessibility, straightforward predictions about whether it’s going to be sunny or rainy are a thing of the past.
Within days of hearing that tsunami of nonsense, I’d added more to my list of overblown (I told you it was windy), supposed informality: ‘plume of cloud’, ‘get out and about after tea’, and even this one: ’13 to 14 degrees? No way, Jose! More like three or four’.
The culprit, more often than not, was weatherman Phil Avery. I know just what you’re trying to do, Avery, but you’ve got it wrong. Your evangelical drive towards colloquialism has nothing to do with trying to make the weather more intelligible. I suspect it has everything to do with you, as a fact-filled meteorologist, using the airwaves to self-indulgently bend our ears with your own brand of repressed lyricism. How dare you foist this obfuscating drivel – or should that be drizzle? – on us!
Then I heard younger forecasters tarting up the fact that there were going to be intermittent spells of wet weather with turns of phrase such as ‘pulses of rain’ and ‘showery regime’. And, worst of all, my temperature positively soared, threatening to reach the highest reading since records began, when the forecaster slipped in unnecessary, oleaginous, get-down-with-the-people snippets such as ‘that’s the scene for someone on the school run’.
It was at this juncture that I began to suspect that deep in the bowels of the Met Office, the authorities hold seminars on how to soften the impact of unpleasant weather predictions by aping the style of the proverbial, mealy-mouthed vicar – a kind of curate-climatologist.
Nor is this phenomenon just an occasional intrusion. It is incessant. I’ve also heard: ‘The wee small hours of Monday’, ‘Lovely day – wish I’d seen some of it’, and ‘Let me get you out of the door first’. This is more than a case of popularising the science of weather forecasting. This is nanny state encroachment. This weather-lite school of approachability clearly feels the need to take us by the hand and lead us gently down the path towards some kind of comfortable, warm front of comprehension.
Leave us alone! We’re British and we’re used to hearing about nasty weather. And we’re quite capable of putting up with a bitter wind thank you very much rather than be told that ‘cold air will slump down and whistle through the rigs on Friday’ or that ‘five to eight should just about cover it’. Put your woke, snowflake language on that slush pile of soggy faux-creativity and tell us what the weather is going to do. 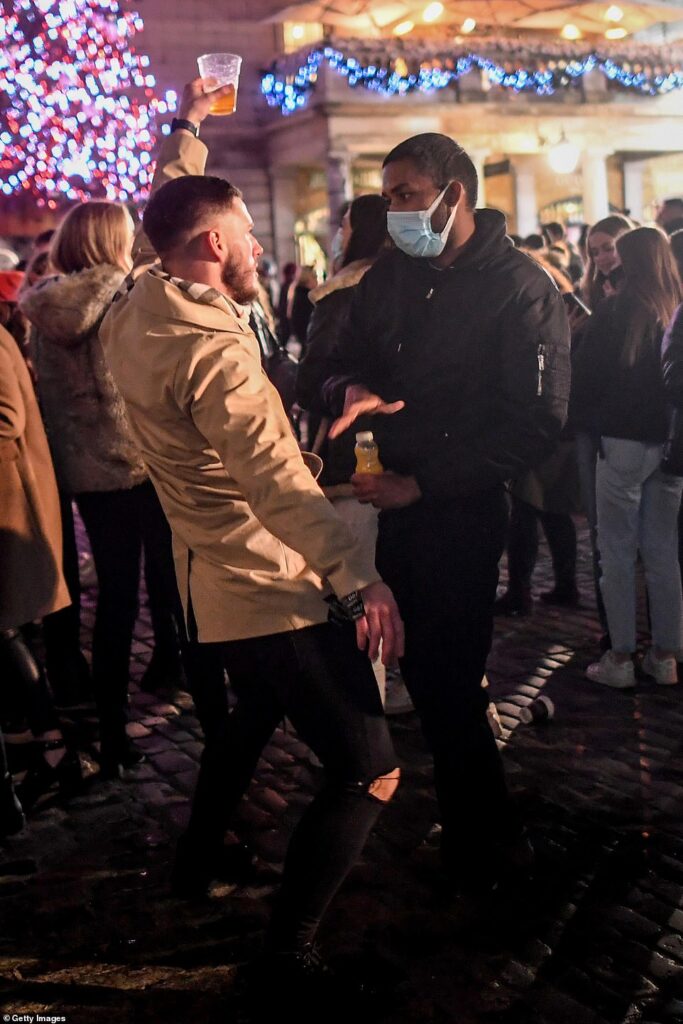 A photograph caught my eye the other day. It showed a young man in London’s Covent Garden brandishing a pint of beer while dancing provocatively in the face of another man wearing a mask. The dancer is not wearing one and he seems to be cajoling the supposedly responsible citizen following Covid-19 safety regulations.
For me, this image encapsulated the divide between those who flout the pandemic restrictions and those who abide by them. It got me thinking about the mindset that allows such maskless revellers to act like this. I wanted to get to the bottom of it.
Rather than lazily express the unchallenged prejudices of a 69-year-old, I sought the views of others – via a simple questionnaire sent by email – across a wide range of ages and occupations. I bent over backwards to catch the views of young people by writing to acquaintances under 30 years of age. In all, I asked about 40 people for their views.
The survey was sent out just as Tier 4 lockdown measures were being implemented. The replies I received were exclusively from people over 60. I didn’t receive one reply from anyone younger, let alone those in their twenties, which is the group largely being accused of these actions. And the questions were not couched in judgemental terms. For example, I made sure I didn’t use the word ‘behaviour’. I did what I could to garner views from a wide demographic range. I failed abysmally.
My cohort of respondents, being fair-minded and intelligent folk on the whole, attempted to analyse the actions of these Covid-19 mockers in a dispassionate way. But they overwhelmingly concluded that the maskless ones had a deep-seated reluctance to obey the rules in the same way that they would occasionally flout parking or speeding rules: they understand that it’s important but if they can get away with it, they will. One respondent suggested that as young children they had never been told they have to do – or can’t do something – so as adults they’re not going to heed to what is required of them, either.
It was also mooted that, allied to this, there is the notion among non-compliers that they see such unquestioningly loyal behaviour as revealing a lack of individuality. The image of the mocking man in Covent Garden even hints that he thinks his rule-abiding counterpart is somehow soppy. The mask shunners are mostly men and, in my experience. mostly white men. Is there, then, a macho element to this? Some thought so.
At bottom, of course, this is a health issue. One might have hoped that the realisation that others’ lives – particularly those within the same family – could be put at risk would put paid to such rule flaunting. Are these people saying in effect: ‘I’m all right, Jack. I won’t die from Covid-19. And if I do contract it, I’ll only get minor symptoms, or none at all’? Everyone thought this was the case. One respondent wondered whether some people think: “Why should I compromise my lifestyle so a bunch of people can live to the age of 83 rather than 82?”
All along, I’ve believed that the UK government has failed to make it clear that many people carrying the virus may not display any symptoms. That, surely, should be one of the decisive factors in dealing with this dreadful disease. Yet it has been largely forgotten in the public consciousness. This amounts to a massive PR failure.
Ignorance is rife, too. A teacher revealed that a colleague had said to him that he was reluctant to receive the vaccine. His rationale was: ‘I’m not ill now, so I don’t need it – and if I end up in hospital, it’s too late anyway.’ He didn’t realise that vaccines are not a cure but a preventative measure. Another commented ruefully: ‘We live in an ignorant and often callous world.’
Does social media encourage these unscrupulous acts? Opinion was divided. But I would argue that the sloppy thinking engendered by rumour and conspiracy theories prevalent on wild west websites and forums foster online anarchy which can lead to anarchic behaviour. People who never leave their echo chambers do not have their blinkered views challenged.
Such articles as this often finish with a platitude such as ‘Nevertheless, most people are obeying the rules’. Well, I bloody well hope they are. Instead, I’m going to hold my hand up and admit that this survey is horribly one-sided. But, given the minimum feedback I got from younger people, it can be nothing else. If I’d received some comments, I’d have read them, considered them and included them here. But I didn’t.